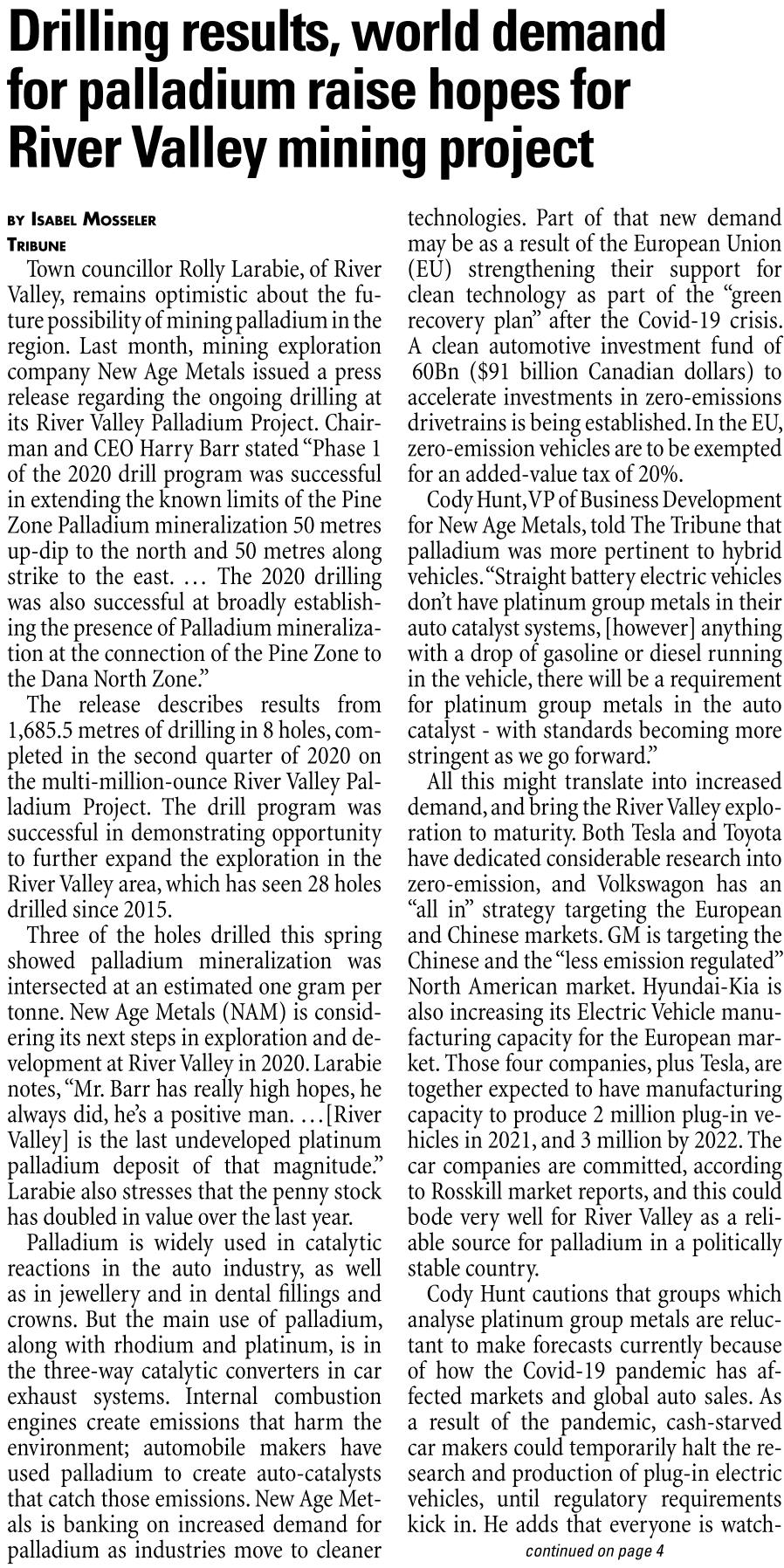 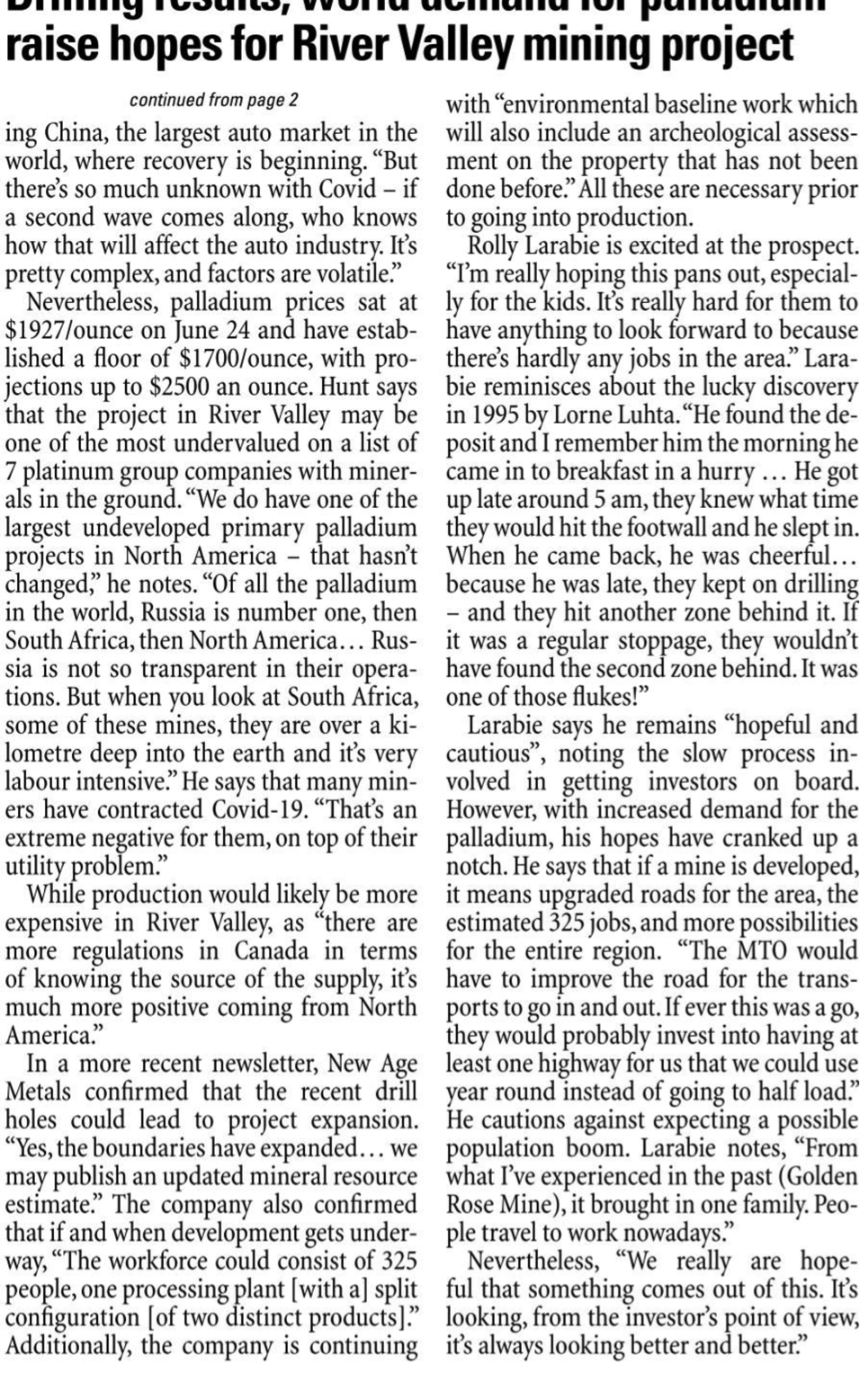 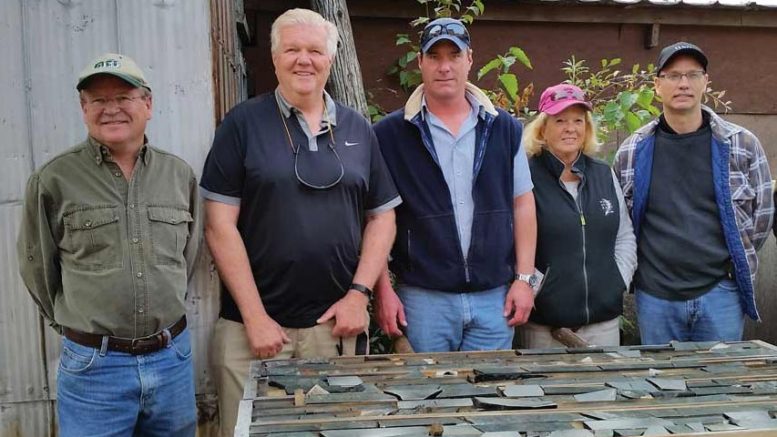 ​A new resource for the River Valley palladium project brings New Age Metals (TSXV: NAM; US-OTC: PAWEF) one step closer to its goal of building a series of open pits over a 16-km stretch of shallow PGM mineralization in northwestern Ontario, where it will be concentrated on site and shipped to a smelter in Sudbury, the company says.
The updated resource estimate — the first since 2012 — incorporates new mineralization discovered in several new zones to the east of the main resource area, in addition to mineralized material on the River Valley Extension, a patch of land to the south of the main resource that the company acquired from Mustang Minerals (TSXV: MUM) in 2016.
River Valley — the largest undeveloped primary PGM resource in Canada — now has measured and indicated resources of 4.63 million palladium-equivalent ounces in 160.73 million tonnes grading 0.44 gram palladium per tonne, 0.17 gram platinum per tonne and 0.03 gram gold per tonne.
Inferred resources add another 2.71 million palladium-equivalent ounces in 127.66 million tonnes grading 0.27 gram palladium, 0.12 gram platinum and 0.02 gram gold.
The new estimate used a cut-off grade of 0.4 gram palladium equivalent. If the resource was calculated using a 0.8 gram palladium equivalent, the same cut-off grade used in the previous estimate, PGM and gold ounces would have jumped by 30% and tonnes by 17% in the measured category.
“It’s exactly what we anticipated and it’s a substantial increase,” Trevor Richardson, the company’s president and chief operating officer, says in a telephone interview from his home in North Bay. “We’re very happy with it or we would have waited to do more drilling. This is very positive and we’re moving forward.”
The company hopes to clear the next hurdle and complete a preliminary economic assessment before the end of this year.
“This is a mine and we’re moving forward to developing it,” Richardson says. “For a major to come into us, or for us to go to a major, we need to show the market and the major an internal rate of return and a net present value, and we’re getting close to that.”
​Richardson, a geologist who has spent the majority of his career working as a consultant on PGMs in South Africa — specifically on Anglo Platinum’s Bushveld Igneous Complex, the world’s largest PGM deposit — says one of the reasons why River Valley is attracting so much interest is that typically PGM deposits are richer in platinum than palladium. River Valley is the reverse with a 2:1 palladium to platinum ratio.
That puts New Age Metals at an advantage, he says, given that current supply and demand fundamentals for palladium suggest a looming deficit. Most of the metal is produced in Russia and South Africa. But the mines in South Africa are becoming much deeper and more expensive to mine.
“Palladium was the top trading metal in 2017,” he says. “There’s not a primary palladium project outside of us in Canada other than North American Palladium. Most existing projects outside of North American Palladium are copper and nickel with some PGMs. We are a primary PGM project, while most other PGM projects have PGMs as their secondary metals.”
Palladium is used in pollution-control devices (catalytic converters) for gasoline vehicles, and Richardson argues that even with the new era of electric vehicles, the metal will remain relevant and required in meaningful amounts for decades.
“Electric vehicles are the flavour of the month, but realistically it’s going to be hybrids, which still require [palladium-rich] catalytic converters, at least for the next thirty years,” he says, “or until I can drive an EV from North Bay to Toronto. We don’t have a single charging station in North Bay.”
“There’s absolutely huge interest in palladium and in us,” he continues. “PGM’s are not something Canada is familiar with, especially a primary PGM deposit, but our feedback lately has been nothing but positive.”
Richardson notes that the project “is a long way from being drilled out,” and the company is planning a minimum of 5,000 metres this year, about the same amount as in 2017.
So far, the focus has been on the contact mineralization, which extends throughout 16 km of the project, he explains. But the company’s geologists are equally, if not more excited, about the newly defined footwall mineralization, on which they have only completed about 3,000 metres of geophysics. It was that program that identified the Pine Zone and T3 Zone discoveries. The plan now is to take the geophysics and drilling program from north to south over the entire project area.
“Going forward, we’d be looking at extending footwall mineralization at the Pine Zone moving south,” Richardson explains. “We did more detailed IP in the footwall over the winter, and we’re still waiting for the report on that from Abitibi Geophysics, but we’re confident that the mineralization will move in that footwall going south.”
Abitibi Geophysics’ high-resolution Ore Vision IP survey can reveal targets at four times the depth of conventional IP without compromising near-surface resolution, the company says, and the recent second phase of the ground IP geophysics at River Valley was completed on an area south of the Pine Zone and over the T4 and T9 target anomalies. The area represents a strike length of about 2,000 metres.
The River Valley intrusive covers 200 km within the Grenville Front Tectonic Zone, a 900-metre thick, mafic, sulphide-poor layered intrusion. In addition to PGMs and gold, the deposit contains small amounts of copper and nickel, which could count as credits at any future mine.
The company is weighing processing options, which include dense media separation to remove the sulphides, and the options will be included in the PEA.
River Valley, about halfway between North Bay and Sudbury, is within 100 km of the Sudbury metallurgical complex. 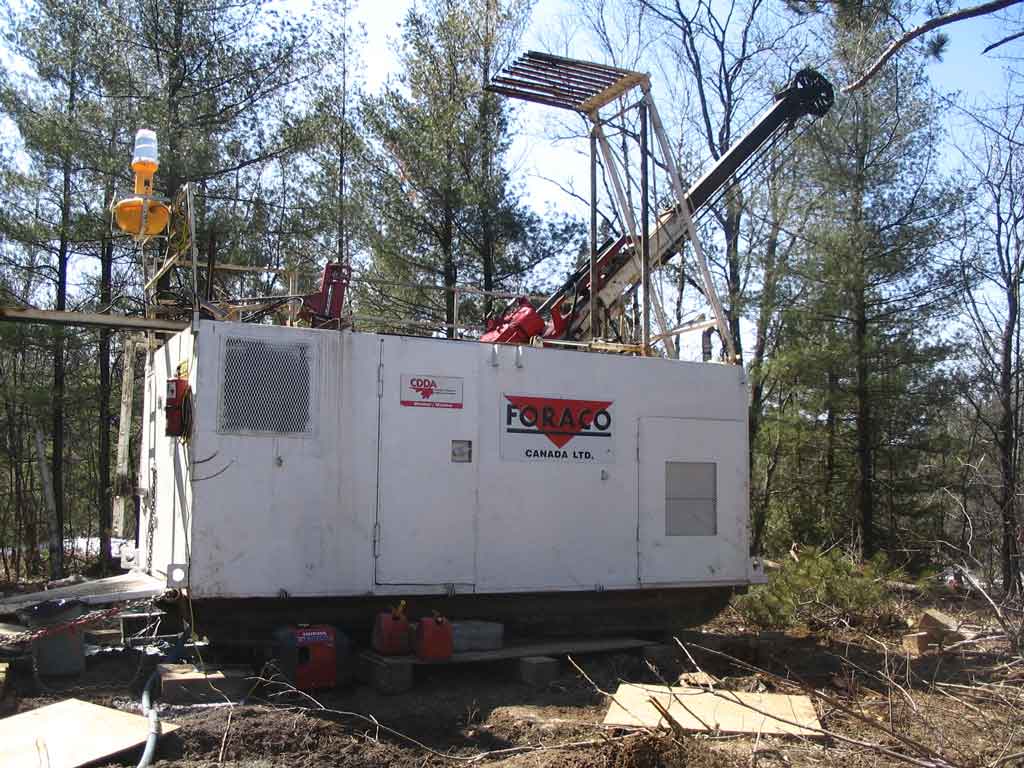 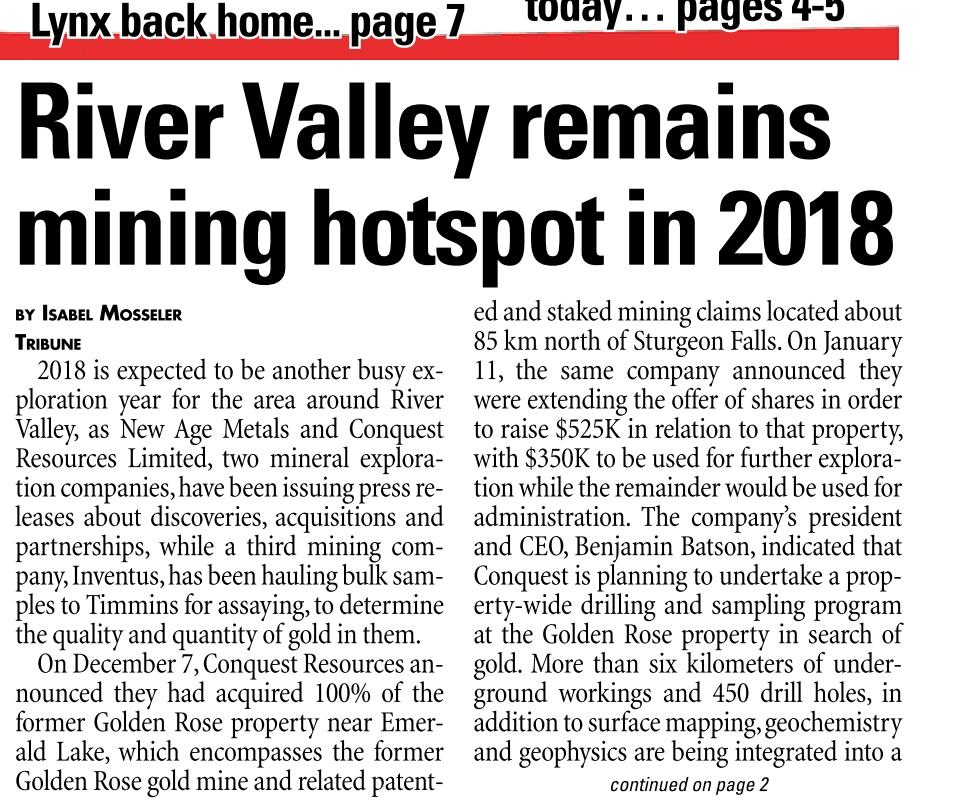 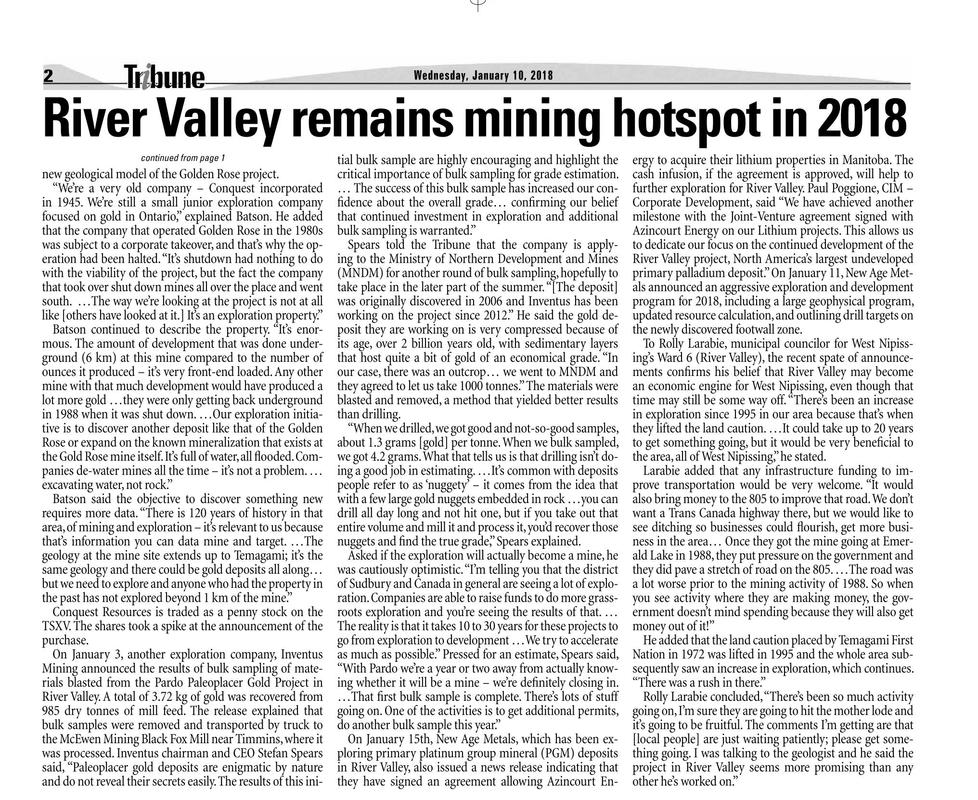